If the challenge of cancer treatment was not enough, radiation burns, or radiation dermatitis, can be an unpleasant surprise. Very little is spoken about it, but nearly all women who receive radiotherapy for breast cancer – 63% of the 55,000 women diagnosed each year in the UK - experience radiation dermatitis to some degree. Similarly, radiation burns are one of the most common side effects of radiotherapy in patients with head and neck cancer.


I certainly had no idea radiodermatitis existed until one of our team here at Odylique mentioned it in the context of our Repair Lotion. She had been unlucky enough to have had two separate cancer journeys, one involving radiotherapy - and skin burns.

The symptoms of burns or rash from radiation are very much like other sorts of dermatitis –itching, pain, redness, skin breakage and burning or stinging.

And the usual prescribed treatment for radiodermatitis is similar to that for many itchy, inflamed skin conditions – petroleum-based moisturisers and steroid creams. The advantage of these is that they are cheap, and that corticosteroids control the radiation burns to some extent. But as soon as they are stopped, symptoms can reappear with a vengeance. The other major problem with steroid creams is thinning of the skin. And it goes without saying that these kinds of side effects are the last thing you need when overcoming cancer.


How to Treat Burns from Radiation Therapy?

Looking through the literature, it is extraordinary how little research has been done into preventing and treating radiation burns. And there is no strong consensus on what works.

Other than steroid creams, some trials have been done with a silver sulfadiazine cream. Silver sulfaziadine is a topical antibiotic that has been used to prevent infection and has shown some positive results in radiodermatitis trials. However, it has proved unpopular due to other antibiotics being more effective and because of a general crackdown on antibiotic usage.

Polyurethane dressings also show some efficacy in clinical trials, but these too come with disadvantages including the faff of applying them and that they perhaps don’t let the skin ‘breathe’ as well as creams.

Are there Natural Remedies for Radiation Burns?

It’s only been in the last 5-10 years that clinical trials or significant research into natural solutions for radiation burns have appeared. There is for sure, much work to be done, but tentatively, there are some encouraging results.

Aloe vera has been tested most, and has shown moderate efficacy. Particularly when radiation doses are very high.

I am always a little suspicious of any trials with aloe vera though, as the quality of the aloe vera gel– and what else is in it – can be so influential. – Gel that has been preserved artificially could weaken the results of any study as preservatives can in themselves be irritants.

Indeed, people who we have asked about using aloe on radiation burns have said it helped them significantly. But they were using the juice squeezed directly from the plant, so it was the purest form. And it’s also vital to use the barbadensis variety of aloe vera.

Other Herbs for Radiation Burns

Calendula extract has also been trialled on acute radiation dermatitis with some success.

As has chamomile, which is in the early stages of being explored as a potential treatment for radiation burns.

From our experience of formulating for skin conditions over a long period of time, it’s clear that herbs together work synergistically to help calm dermatitis. This is borne out also for example, by a study in Korea which found positive results from ‘Jaungo’, a combination of herbs including gromwell root and angelica.

Our own ‘in-house’ success of Odylique Repair Lotion on radiation burns is another instance of herbs working remarkably well together. While this was never the intended use of this cream – Odylique’s founder Margaret first created it as a natural remedy for her family’s eczema – the herbs within it are traditionally used for all the symptoms of radiation burns.

Repair Lotion combines three of the herbs – calendula, chamomile and aloe vera – that are being researched for radiation burns, as well as chickweed for its capacity to calm itching and St John’s Wort which has an anti-bacterial action on the skin. 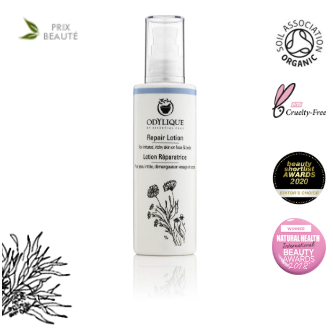 How Long Do Radiation Burns Take to Heal?

There are different stages of radiotherapy burns. As the treatment progresses, the dermatitis can evolve, ranging from mild to acute. Some research suggests that applying creams right from the beginning of treatment can be helpful, delaying the onset of burns later than the typical point of week 2 of treatment. This can also help shorten the healing time, but there is no specific period and it can vary from a few days after treatment to several weeks.

With any skin condition, we would always recommend applying moisturiser little and often. This keeps the skin moisturised, but not over-moisturised and avoids the risk that the skin becomes ‘lazy’ with the production of its own oils.

Want To Try Our Products?

Odylique's entire range of skincare, haircare and makeup is certified organic, giving you piece of mind that all our products are as pure and natural as we say they are. We offer a wide range of samples for those of you that would rather try a smaller quantity before purchasing the full item.

If you’d like to try a sample of Odylique Repair Lotion, or any skin care advice, please get in touch with us at [email protected]

It’s important to underline that the above should not be interpreted as medical advice and in no way do we wish to suggest that any Odylique products can treat cancer or associated medical conditions.